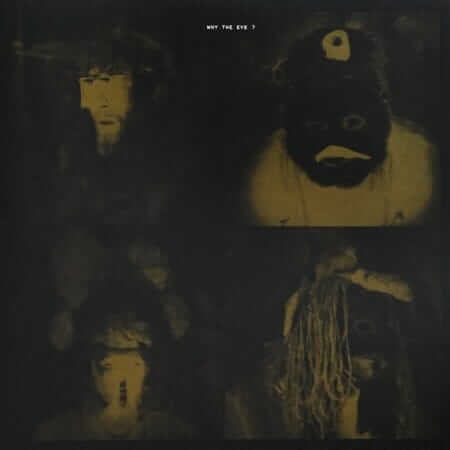 Cross out the all seeing eye and ears will open onto questions tracing the lithic grooves of an anachronic industrial. Why the Eye’s paleo-futurism suggests a mode of Rock in Opposition displaced into alternative timelines. It is as if the Leg End of Henry Cow has escaped its retro-avant ‘chamber music’ fetters, toward the hypnotic patterns of dance floor exuberance. These rituals exhume unidentified audio relics from a future yet to be within a deep past that will have been.

Each track on Why the Eye’s debut leads into an exploration of an entranced dreamscape that would be mislabeled as an ‘interlude’. Instead, Why the Eye weave numerological significance into their myth: the energetic, odd-numbered tracks are counterbalanced by the mesmeric reveries of the even-numbered tracks. Using ∆ for their titles, these unpronounceable names express the unconscious catacombs of their invisible sonic worlds.

Why the Eye uses an array of handmade instruments, each featured on the album’s insert: hurgy, papillon, radiocaphone, castabignettes, drumkit, and the various sizes of lamellos. These hybrid tools give an elemental presence to their lithic grooves and a uniqueness to their spectral techno.

The album’s opener, ‘Dombo’, could equally be heard as the audio parallel to the ‘pataphysical Museum of Jurassic Technology’ as much as the reopening of the Bay-area’s Sleepytime Gorilla Museum. The heavy hypnosis of ‘Plastique’ sets the machine churning, with its ∆∆ breakbeat skit closing side A. The nouveau post-rock of ‘Free Gluten’ continues the meditation to side B, as ‘Papillon’ Afro-punk invites us back to dance. ‘Bragitto’ lightens up the energetic weight and its ∆∆∆∆∆ dream closes the album with murmurs suitable for any ambience.

If music will have been made to announce the retrieval of lost futures, the initiation of Why the Eye might be said to have incepted some of its timbres. — APlynt016 —

Vinyl LP: 440 copies, to be released on the 4th of September 2017, worldwide distribution by Clone. Includes download code. Triple Why The Eye ? Audio Beer: Limited batch of Triple beer, including download code. Crafted by Mad Yeast. Available in Brussels & at the band’s performances. Digital. —

This work is licensed under a Creative Commons Attribution-NonCommercial-NoDerivatives 4.0 International License.